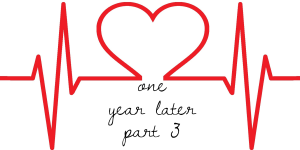 Continued from Part 1 and Part 2

We arrived at UAB around 11 PM and met the nurses in ICU. They were wonderful! The doctor came in and briefed us, and then asked for our cell phone numbers just in case she needed to reach us. Mom, Sara, and I made our way to a hotel that is connected to UAB Hospital, and finally crashed for the night around 2 AM. At 7 AM, mom’s cell phone rang. We were all still sleeping and missed the call, but then Sara’s phone immediately rang. It was daddy’s doctor at UAB. She calmly told us that daddy had another heart attack, and that we needed to get to his ICU room right away. We threw on clothes as fast as we possibly could. I called Bro. Bob (our family’s former/forever pastor) and he prayed as we ran to the hospital. I felt like we were in a movie. Mom, Sara, and I were walking quickly down the never-ending hallway at UAB (it spans 7 blocks). I asked Mom if I should run. She said “Go! Go!” so Sara and I took off in a sprint. We made it to the elevator, gasping for breath, and rode up to the ICU floor not knowing what we would find.

Amazingly, when we arrived in the room, daddy was stable. He was still intubated, but they had stopped his sedation, so he was alert and knew what was happening. Since daddy was allergic to some of the blood thinners, they had to be very careful about what they gave him. Because of this, his stent had gotten blocked, which caused the 2nd heart attack. Since UAB is a teaching hospital, about 8-10 doctors came around for rounds. We listened as the Attending Physician explained the dilemma they faced. An overnight scan revealed that daddy had several blood clots in his abdomen that were actively bleeding. They needed to stop the blood thinner or he could bleed out internally and die. However, if they stopped the blood thinner, his heart would again become blocked and he could die. There was no good option. I asked a doctor about my daddy’s condition, and he responded, “He is a very sick man.”

It was determined that they would attempt a procedure to stop the bleeding in the abdomen. The resident doctor stood over my daddy and asked him the required “living will” questions, such as, “If your heart stops during this procedure, do you want us to perform life-saving measures?” I watched as daddy, who couldn’t speak, shook his head “yes.” As they wheeled daddy down the hallway for the procedure, mom went with him to sign paperwork. Sara and I sat in the empty room. I leaned on her shoulder and broke down sobbing, wondering if that was the last time I would see daddy alive. About a minute or 2 later, a women stepped in the room and said she was a Chaplain and asked if we would like to pray. YES! She, Sara, and I stood in the room and prayed for daddy. I called Aaron and told him that we would figure out the logistics later, but he and Turner needed to leave Texas and get to UAB right away.

In the meantime, we expected to be at UAB long-term, and needed to make arrangements on where to stay while we were there. I had researched the UAB Townhome program, and made an appointment to meet with them. This ministry graciously offers fully-furnished small apartments for rent for about $30 per night. They also provide some free food and other necessary supplies. Such a blessing. It is located very close to the hospital, so I walked over to their building with Aunt Bonnie and a family friend and made our lodging arrangements. While we were there, I got a call from my mom. She stated that daddy was out of surgery and there was NO ACTIVE BLEEDING in his abdomen. We found out that once he got into surgery, it was determined that the blood clots in his stomach were no longer bleeding and the procedure was not needed. Praise the Lord! This was a miracle, as we had just seen bleeding on the scans we had been shown that morning.

As the day progressed, we were able to communicate with Daddy. When we told him that Aaron and Turner were coming, he cried. We thought he was crying because he thought something was wrong, but we later found out that he was crying happy tears that Aaron would drop everything and make that long trip with a toddler to be with him. We knew daddy’s mind was intact, but we were unsure of what function was left in his body. At this point, the massive swelling had diminished, but he had been sedated in bed for 8+ days. We gave him a pen and paper so he could try to write, but he wasn’t able to. We wondered if he had somehow lost that ability. Late that night, we slipped out of the room while daddy slept and unpacked at our new home away from home.

When we arrived to the hospital room on Tuesday, we were pleasantly surprised to learn that the medical team had decided that daddy’s breathing was good enough to remove him from the ventilator! We were so excited! Just a few days earlier, we had prepared that he might be on the vent for weeks, so this was also another miracle. Once the vent was removed, we were finally able to hear daddy speak for the first time since the incident. Such a wonderful sound! He was still a bit sedated that night and said some really funny things! I remember him telling us that he had a new perspective on life. He went on to grab the blanket and say “like this blanket, for example…” but he never finished the sentence. There was also a story about finding a dog in a junk yard! Daddy also swore to us that after we left at night that the nurses had a party every single night. He said they would bring in food and just party all night. When the physical therapist came in for a short exam, daddy was “less than impressed” with him. After the therapist left, daddy said to me, “I bet that just cost me $50,000.” Ha! Back to his old self. I gave him a pen and paper again so he could try to write, and amazingly, he wrote with perfect penmanship, “I love you, Linda.” Definitely back to his old self.

To be continued tomorrow in Part 4

The song that I remember during this time period is “He is Here.” I knew daddy loves that song, so I played it on my phone by his bed. He was still sedated and we thought he was asleep, but he began to sing along. I’ll never forget that moment.

“I sense an awesome moving of the Holy Spirit. And I see His countenance resting on your face. I know that there are angels hovering all around us. For the presence of the Lord is in this place.”