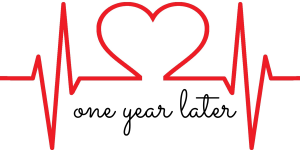 When I was finally able to fly out on Monday morning, I was unsure of what I was going to arrive to. There were still so many of our family members at the hospital. Mom and Sara had been staying in the waiting room overnight, and I planned to do the same. When I was finally able to see my daddy, he was heavily sedated, intubated, and non-responsive. He was hooked up to so many machines, and I was so nervous with each beep. The nurses at Rush were so great. Sara and I had gone to high school with many of them, so quite a few people there knew my dad personally and were really invested in his care. We got to go to his room 4 times per day, 30 minutes each time. At each visit, we analyzed everything. Did his swelling look any better? Is his blood pressure ok this time? What were the latest test results? Can he hear us? It was really agonizing being there but still being helpless.

The rest of the week at Rush was hurry up and wait. Mom stayed in the hospital waiting room every night (sleeping on a tiny, hard “couch” of 3 connected chairs), while Sara and I took turns staying there with her at the hospital or at home. Aaron’s sister lives close to the hospital, so she graciously let us stay with her and shower at her house several times. There were so, so, so many people who were so precious to us. They called, came to visit, brought food, cried and prayed with us, and did anything that we needed. Sometime during the middle of the week (about 4-5 days after the incident), Daddy’s cardiologist told us that they were really at a standstill, as daddy was no longer a cardiac patient, but he was still in very critical condition. He told us that we would take a “wait and see” approach over the weekend, and that we should “hunker down,” as we could be there for weeks. He also mentioned the possibility of needing to take daddy off the ventilator and perform a tracheotomy. We felt defeated, but decided we would do whatever it took to get daddy better. It’s hard to explain, but during this time, we grew stronger in our faith, but it was still an incredibly difficult time. My mom felt the Lord speak to her “He will live and not die.” Similarly, I heard God speak to me with extreme clarity “I am not slow.” We knew this meant that we just needed to be patient and trust in God’s timing, so we tried to do just that.

On Thursday evening at the 5 PM visit, one of daddy’s nurses told us she’d like to talk to us privately after our visit. She pulled us aside into a medical supply room for a conversation that I will never forget. She told mom, Uncle Leo, and me that daddy was not improving, and she was not satisfied with the “wait and see” approach from the doctors. She cried and said that as his advocate, she went to the doctor and said that if they could not treat him at Rush, they need to get him to a hospital that could treat him. She recommended UAB – University of Alabama at Birmingham. We were shocked, scared, and confused. Looking back, I am 100% positive that this amazing nurse saved my daddy’s life. The doctors at Rush agreed to transfer him, and through a series of events, daddy was accepted to UAB. The problem was that there were no ICU beds available. So we did the only natural thing to do at that point…we began praying for the patients in UAB ICU to be healed so a bed would be free for daddy!

We waited, somewhat impatiently, for days until we finally got word on Sunday evening that daddy was going to be transferred to UAB that night! We packed up all of our things in our makeshift home (the ICU waiting room) and waited for instructions. The UAB flight crew arrived to prepare daddy for transport. He would be driven by ambulance to the Meridian airport, where he would then be transferred onto a plane to UAB. We would follow in our vehicles. Some dear friends from my parents’ church were there to see us off. They prayed with us as we watched daddy be wheeled off to the ambulance. It was scary, but I felt such hope that he was going to be okay if we could just get to UAB.

Side note – Daddy loves music from the Family Worship Center. I would take my phone into his room and play some of his favorites, hoping he could hear it and be encouraged. I listed to this song over and over while we were at the hospital. “He never promised that the cross would not get heavy or the hill would not be hard to climb. He never offered our victories without fighting but He said help would always come in time. So remember when you’re standing in the valley of decision and the advisory says give in…Just hold on. Our Lord will show up and He will take you through the fire again.”