Life changed for my family on August 22nd, 2015. My very young 68 year old daddy had a heart attack. It caught us completely off guard, as he had always been extremely healthy and active. If it had just been a heart attack, he likely would have been in and out of the hospital 2-3 days after the stent surgery. Unfortunately, though, he had an extreme allergic reaction to one of the medications, which led to a 5.5 week stay in various hospitals. I may go into detail one day of what all went on during that time, but for now, we choose to look forward, not back.

One of the complications that he experienced is the loss of use in his right leg due to extensive nerve damage. As a man who is constantly active (he started running 5k races in his 60’s!), this was very hard for him and for our family. He is so positive, though, and has never complained. He chooses to work hard at physical therapy, pray and believe for his healing. This photo was taken shortly after his release from the hospital. 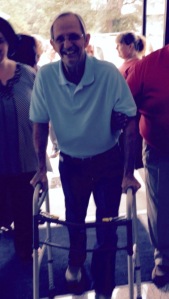 In January of 2016, our church started a new series and a 21 day devotion called “The God I Never Knew.” The purpose of the study was to learn more about the Holy Spirit and to listen for His voice. I typically listened to the devotions on the church’s app, and each one started with a worship song. About 6 days in to the devotion, I was listening to the song and praying for my daddy. I kept hearing the words in my spirit, “Get up and walk.” I immediately dismissed it as something that I had just made up myself, but as I continued to pray, I kept hearing the same phrase over and over, and I began to cry. I just knew that the Holy Spirit was speaking those words to me regarding my daddy.

The scripture at the beginning of the devotion was John 16:13 – “However, when He, the Spirit of truth, has come, He will guide you into all truth; for He will not speak on His own authority, but whatever He hears He will speak; and He will tell you things to come.” (emphasis added). At the end of the devotion, a portion of the prayer said, “Help me today to listen to You. Reveal your heart for my future and for those around me…”

I began weeping. I felt such confirmation in my spirit that daddy would walk without assistance again. I called my parents and shared with them. A few weeks later, I received a text message from my mom with this video attached:

PRAISE THE LORD!! He is faithful! We know with assurance that due to the prayers of MANY people (not just me), daddy will continue to improve and will ultimately regain full use of his leg. What is it that you’re praying for today? I challenge you to open your Bible, open your heart, and allow the Holy Spirit to speak to you to show you the things to come.

One thought on “Get up and walk”